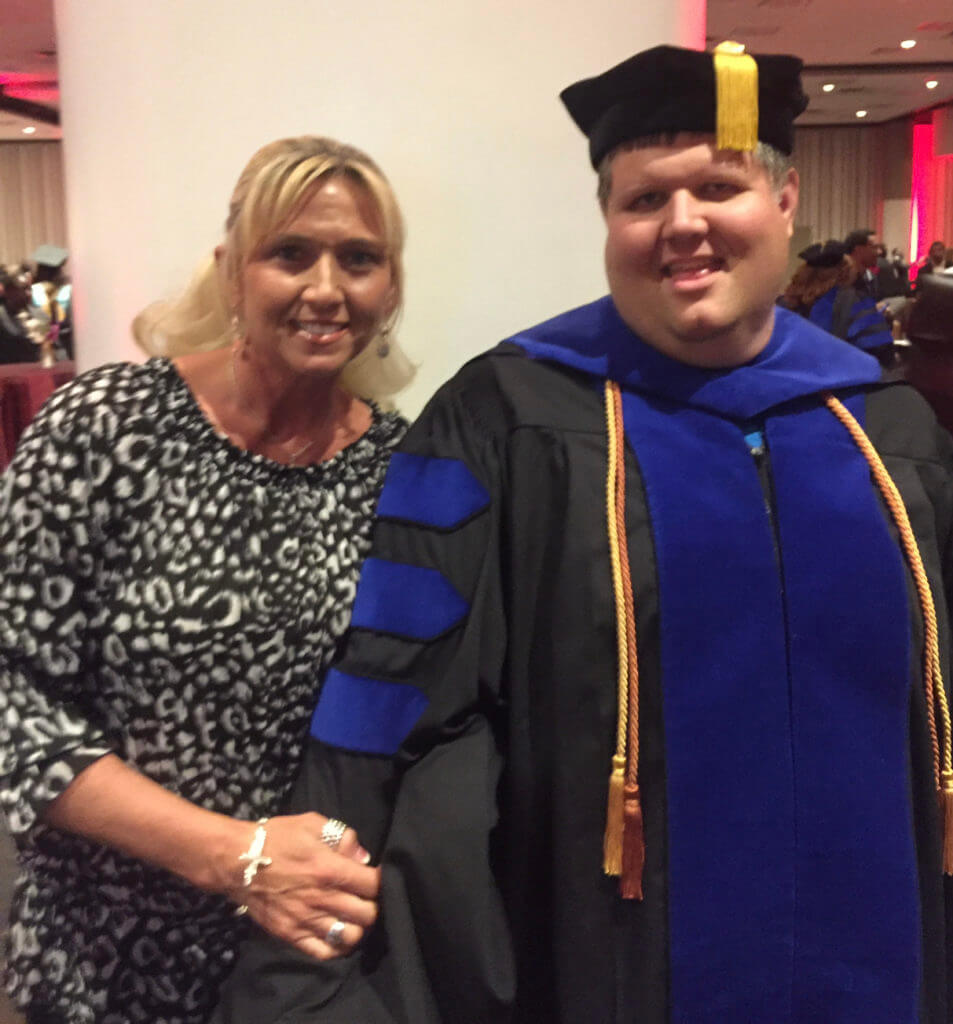 Hey Guys! THANK Y’ALL FROM THE BOTTPM OF MY HEART! My name is Kristi. I’m from Alabama (close to Florida line). I want to share with you my brother, Joey’s story.

My brother was born with Hydrocephalus and Spina Bifida. It was in the late 70’s and it was not discovered until he was 6 months old. I was 7 when he was born, but I remember him crying…. a lot. (His head hurt). The doctors told my mother he’d be mentally retarded and never walk. Well God saw to it that that was not to be true. He had numerous surgeries as a baby and a toddler. I can’t count the shunts he had. Well, my brother walked at 3 years old. And far from it, was NOT mentally challenged in the least.

Through grade school, my mother went to school with him every day, to help carry his lunch tray and overall help as needed (before IEP s and things schools needed to accommodate him). But my mom did it every day. He repeated kindergarten bc he had missed so much with shunt revisions. But he made it through grade school. In high school, he shot up and grew to be a very big guy. His hands are unreal…. and left handed! What an amazing athlete he would have been. I’d also like to say he had a few amazing and protective friends from middle school on through. David and Jeremy (I WILL NEVER FORGET YOU GUYS). Thank you boys for having my brothers back!

During his 10th grade (I think that was the year), he got really sick and had like 5 failed revisions in a row and basically told my mom this was it. Again, God said, nope. He had to be on home bound that year, where a teacher comes to the home and teaches so student won’t get so behind and have to repeat. This was another amazing gent in our lives! He was a veteran and was wonderful with my brother.

So he finally graduated high school and wants to continue in college. He always had a lot of time on computers and video games, so that’s what he went for. Something in the computer realm. He plugs along, my mom and dad split (no wonder). But she moved to Pensacola Fl. My brother moves in with her. One October morning he was getting ready to go to class and she had an older home with those thick glass shower doors. My brother has balance issues because of one leg being about 5 inches shorter than the other and all of his other issues. He slipped in the shower and tried to catch himself by putting out his left (dominant) arm against the shower door. It couldn’t withstand the stress and it smashed with his arm being raked like if you eat the flapper of a chicken wing, slicing his artery. The only thing holding his arm on was bone, all else raked away. As he’s bleeding out, he manages to get to a phone and call 911.

They come and had to break down the door (chilling 911 tape. I couldn’t listen to until about 5 years later). You can hear his breath leaving. So HUGE thank you to paramedics and police and fire department for getting to him. One guy didn’t even put on gloves bc he was so close to death. They get him loaded, he crashes several times between the ride and the surgeries. (Later he told me he saw our grandfather who had already passed).

Let me go back to while my brother was waiting for the ambulance to arrive, my moms’ lil dog, a shitzu, Sparky, licked him in the face the entire time (I think trying to keep him awake). The dog passed blood for days after licking my blood soaked brothers face.

Ok, so the docs were able to save the arm, but he only has about 30 % use. …. of his dominant hand. So in his early 20’s, he has to learn to write using his right hand and do numerous other tasks as well. He medically withdrew from classes for that year…. but returned after he could write using his other hand.

So from early 20s to now, he has had a few more shunt revisions managed to get like 3 AA degrees, a bachelor degree, 2 masters degrees and about a year and half ago, he graduated with his PhD! And met someone, and married as well. He was a prime candidate for receiving disability from the government but REFUSES.

He now works on a base at Fort Knox with a pretty high-security clearance doing cybersecurity stuff. He has ALWAYS been my inspiration… My little brother, Joey Jernigan! Definitely a survivor and NEVER QUIT story!