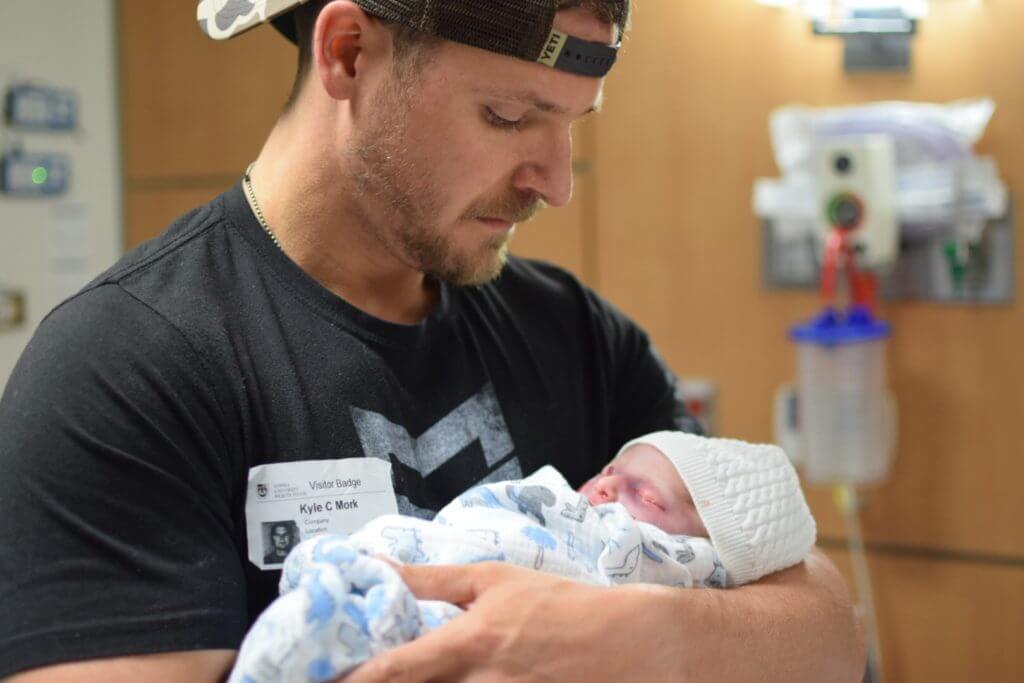 My name is Kyle Mork and I’m a 35-year-old guy from the suburbs of Chicago. I grew up with a great family and was given whatever I needed to succeed. To be honest there were times growing up when I thought things were unfair or I did not get what I thought I deserved, but that was bullshit cause I just wasn’t working hard enough. I had struggles, but nothing so detrimental that it couldn’t be resolved. That all came crashing down on Oct. 4th of 2019.

My wife was pregnant with our first child, Garrett and we had just moved to the suburbs from the city, bought a family SUV, and all the other things you do as first-time parents. Everything was all set up in the house and my wife noticed she was having contractions so we headed out to the hospital. Since it was the exact due date we were extremely excited heading to L&D. When we arrived they brought Amanda in and placed a HR monitor on her belly, no heartbeat. Brought the senior nurse in, still no heartbeat. Then the doctor came in with the ultrasound machine, I remember seeing my son’s little face as soon as the doctor sad 3 words that have changed our life forever, “I’m so sorry…”

I was so upset that when I cried I did even have tears and I kept looking around for someone to help our son but there was nothing anyone could do. My wife delivered our son that night and we only had a short time to hold him before he needed to be taken for his autopsy. My wife being the strongest woman I have ever met refused to use a wheelchair when we left the hospital a few days later.

Months later we were on the roller coaster of grief that still to this day has not ended. At the time I was training for a hunter athlete competition known as Train to Hunt. I would get up around 4 am to hammer out a workout but felt dead inside. In mid-December, I woke up one morning and thought “I don’t want to be here anymore as I stared at the .45 on my nightstand.” Then after a few mins, which at the time felt like an eternity, I said to myself “if you are going to kill yourself, do it in the gym and push yourself until you die.” So I tried, and tried, and tried. I came to find out that I could push my body further than I could ever imagine. Somedays I would leave the gym in tears because I thought I had pushed hard enough to finally do it and could see my son again, but I was still here. I took second in my division that year.

During that time, I also tried to seek out help from other fathers like me, as you can imagine there wasn’t any, so I took action. I started the Dads and Angels Podcast which brought on Dads, doctors, and even motivational speakers to talk about what it’s like to lose a child and share their stories so that others could know that they are not alone. It was so hard to record each episode but I knew that it was helping at least a few guys out so I have kept it going.

I am in a constant battle with grief in my head but producing that podcast and training for Train to Hunt have helped me crawl out of some very dark places. Now when something like a workout gets hard I just laugh a little and say, “fuck it, I’ve been through worse than this, what more can they do to me.” I try to keep that mentality, sometimes it works, other times are just bad days. So many of the guests on your show and you two have been a huge help during times when I needed help. Goggins, Jason Khalipa, and Cam Hanes to name a few. Thank you for letting me tell my story and thank you for doing what you do, it has in many ways changed my life.

P.S. – During this year’s Train to Hunt competition I took 1st place overall and got to stand and flex my bicep with my son’s name on it for everyone to see the source of my strength.