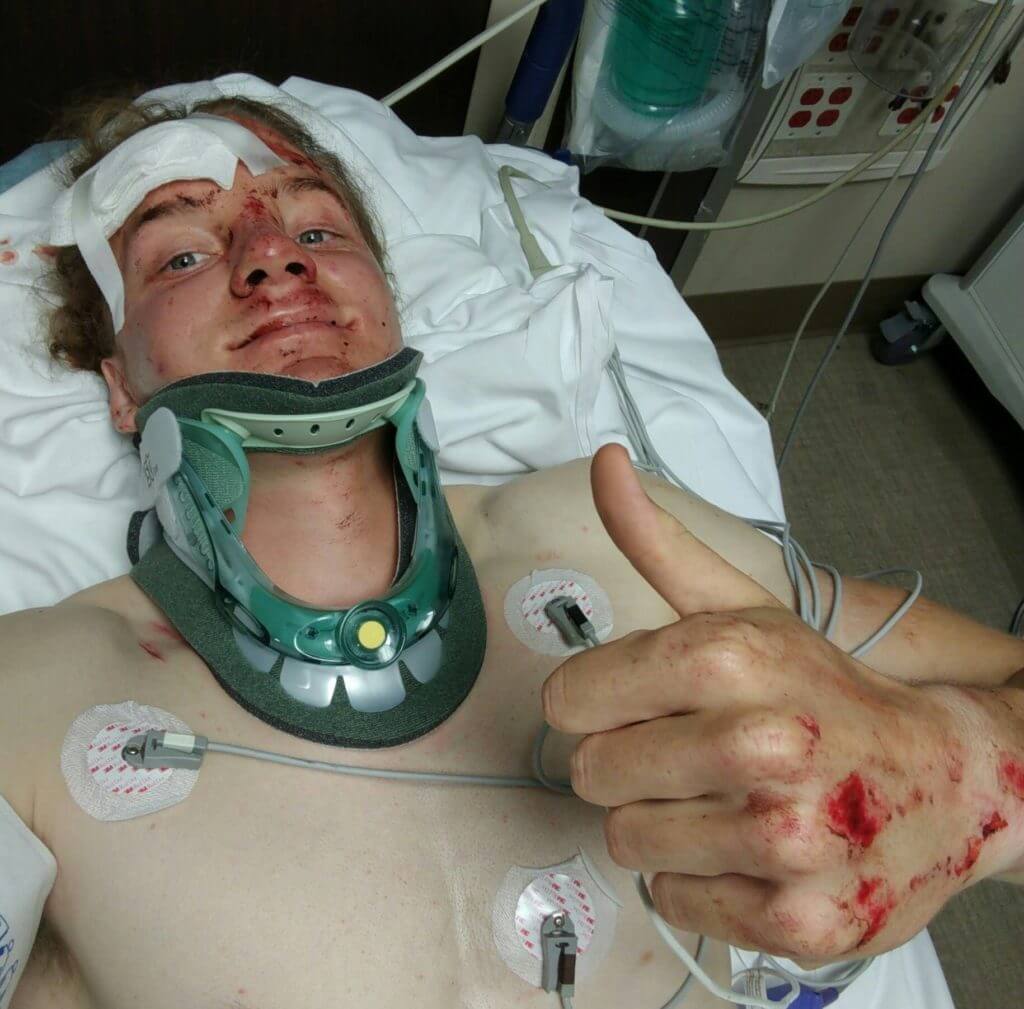 On August 3rd, 2017, I was finishing up my first week of grad school at the University of Tennessee in a city that was 800 miles from home where I only knew a handful of people by name. As I strapped my helmet on for the bike ride to campus that morning, I had no way of knowing that my life was about to change forever.

About ½ mile from my apartment, I started down a steep grade, hit my brakes, and the lights went out. When the parks maintenance crew found me, I was carrying my mangled bicycle off the road as the blood poured from a 2-inch gash on my forehead. The only thing I remember from that morning was being asked why I was in Knoxville, TN and having to think really hard to come up with the correct answer.

I regained awareness in the UT medical center trauma bay where my clothes were being cut off of me, and the nurses were taking every precaution to keep from jostling the gurney that I was lying on. The first thing I said after regaining awareness:

“I don’t mean to freak anyone out, but I think my neck is broken…”

Everyone and everything stopped.

The crowd of nurses and doctors backed away and two men stepped up to my gurney. Wes and Kermit were their names. They were both about 250+ lbs and looked like professional bodybuilders. Their job was to get me into the backboard and neck brace as gently and quickly as possible so I could be transported to the CT scanner for further evaluation.

After 4 separate CT scans, the doctors came into my hospital room to report that I broke my C2 vertebrae in my neck, it was putting pressure on my spinal cord, and that I would require immediate surgery.

A few moments later, a separate doctor came back in. This time, the expression was a bit more somber:

“Cole, you also broke four vertebrae in your lumbar region”

I responded with silence. He continued:

“This is usually the point where people break down and start crying. That’s ok to do.”

“I’m alive and that’s all I care about right now.” I said with a forced smile on my face.

I later found out that the quick release on my bicycle’s front tire had come loose. When I hit the brakes going downhill at ~20 mph, I was propelled over the handlebars and into the pavement where my face and neck kept the rest of my body from getting really hurt. When all was said and done, I had broken my nose, C2 in my neck, L4-7 in my back, required 17 stitches in my head, degloved my jaw, and knocked out a few teeth. I would have to undergo an immediate surgery to fuse the vertebrae in my neck and I would need to have the flesh on my chin stitched back onto my jawbone from pre-molar to pre-molar.

I was honestly embarrassed. I was embarrassed that I was causing my parents so much stress from 800 miles away, and I was embarrassed that all of these people that I barely knew from my graduate department at UT had to make time in their schedules to help me. I was terrified of being a victim, and my response to the events that transpired on this day was overwhelming positivity. I made it a point to repeatedly tell everyone (including myself) that I was fine, even when I wasn’t. I forced myself to proceed with graduate school as if nothing ever happened and to remain as positive and kind to others as possible. I started teaching and taking classes in a c-collar two weeks after my surgery with frequent nauseating migraines and severe back pain.

Shortly after I was cleared back to normal activity 3 months later, I signed up for the Knoxville marathon. The fight was over, but I still felt like I had something to prove and I needed to get fit once again. I thought that I was proving to everyone that breaking my body would not define me. Really, I think I was just trying to prove that to myself.

When I finished that marathon six months after my accident, I promptly signed up for the Firewater 50k where I won outright and broke the course record by 35 minutes. Then, the lookout mountain 50 miler in December 2018 where I finished in just over 11 hours. I am now training for the Yeti 100 miler on September 27th, 2019, and I have plans of meeting the marathon Olympic time trials standard for the L.A. 2028 Olympics. I have fallen in love the sport of running on accident.

If people take anything from my story, it is that, sometimes, a positive attitude is all it takes to turn the worst day of your life into a lifelong passion and something that brings you joy on a daily basis. And maybe, just maybe, that event which seems detrimental to you at the time will turn out to be the best thing that ever happened to you. I wouldn’t take my detrimental event back for anything.

Thank you, gentlemen, for your service, and thank you for creating the TNQ platform where we can share and be motivated by some great stories.

PrevPreviousNever Quit, Never Accept A No
NextYou Took One Step, You Can Take Another.Next