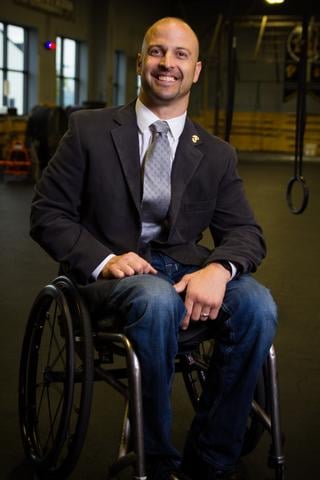 You may hear Chris Kaag’s booming voice before you see him roll around the corner to greet you with a
huge smile and an even bigger handshake. Like many influencers in the community, Chris Kaag wears
numerous hats as the founder and Executive Director of the IM ABLE Foundation, founder of Corps
Fitness, adaptive athlete, public speaker, and relentless advocate for the adaptive community.
Shortly after graduating High School, Kaag served his country in the United States Marine Corps for
almost five years. He still remembers the words of his Drill Instructor, “Don’t quit on me, Kaag” which
would serve as a beacon of hope and reassurance in the upcoming years. At the age of 21 and in the
prime of his military career, Kaag was diagnosed with adrenomyeloneuropathy, a rare degenerative
condition affecting the myelin sheath of his nerve cells and was discharged from the Marine Corps. He
began to walk with a cane, then two canes. With new direction and a “don’t quit on me” attitude, Kaag
earned a business degree from Penn State Berks and began using his military-style fitness regimen to
train small and large groups. These training sessions and Kaag’s passion for improving the quality of life
for those around him through physical fitness, evolved into Corps Fitness, headquartered in Wyomissing,
Pennsylvania. Meanwhile, his condition continued to worsen, and he soon transitioned to a wheelchair.
Kaag persisted with strength and resiliency and began competing in races and raising funds for medical
research which gave way to the new-found pursuit to assist other veterans and individuals with
disabilities.

In 2007, he launched the IM ABLE Foundation, with the mission to remove obstacles that prevent people
with disabilities from being physically active by providing grants, resources, fitness opportunities and
motivation. His motto was simply, “Get Up and Move!”. He has developed programs like IM FIT, a free
fitness class for all adaptive children and young adults to practice the fundamentals of exercise together
in a supportive and motivational environment, Operation Lead From the Front, a mentorship program
which matches adaptive athletes with veterans in a relationship fostered around physical fitness and fun,
and Rally Point, geared around his passion for the trails, which joins the adaptive and able-bodied
community on various level bike rides through the Berks county trails and beyond. The IM ABLE
Foundation has also awarded hundreds of equipment grants to motivated and deserving individuals in the
adaptive community.

He has been able to accomplish great things with the support of his resilient and ever-supportive wife and
fellow-trainer, Gretchen Kaag. Their rambunctious and lovable son, Carter, is a testament to the Kaag
culture.

Chris Kaag is an inspiration to everyone, able-bodied and adaptive, that he encounters, and he
encourages them to celebrate the abilities they have, rather than focus on those they don’t. Chris, his
family, his team, and his community believe that an active lifestyle is achievable for all, regardless of their
abilities.

Improvise, Adapt and Overcome
“Only when we reach beyond our
perceived limits and are forced to
find strength deep within our souls,
can we truly understand who we
are.”
— Chris Kaag, USMC, Founder
& CEO of the IM ABLE
Foundation and Corps Fitness