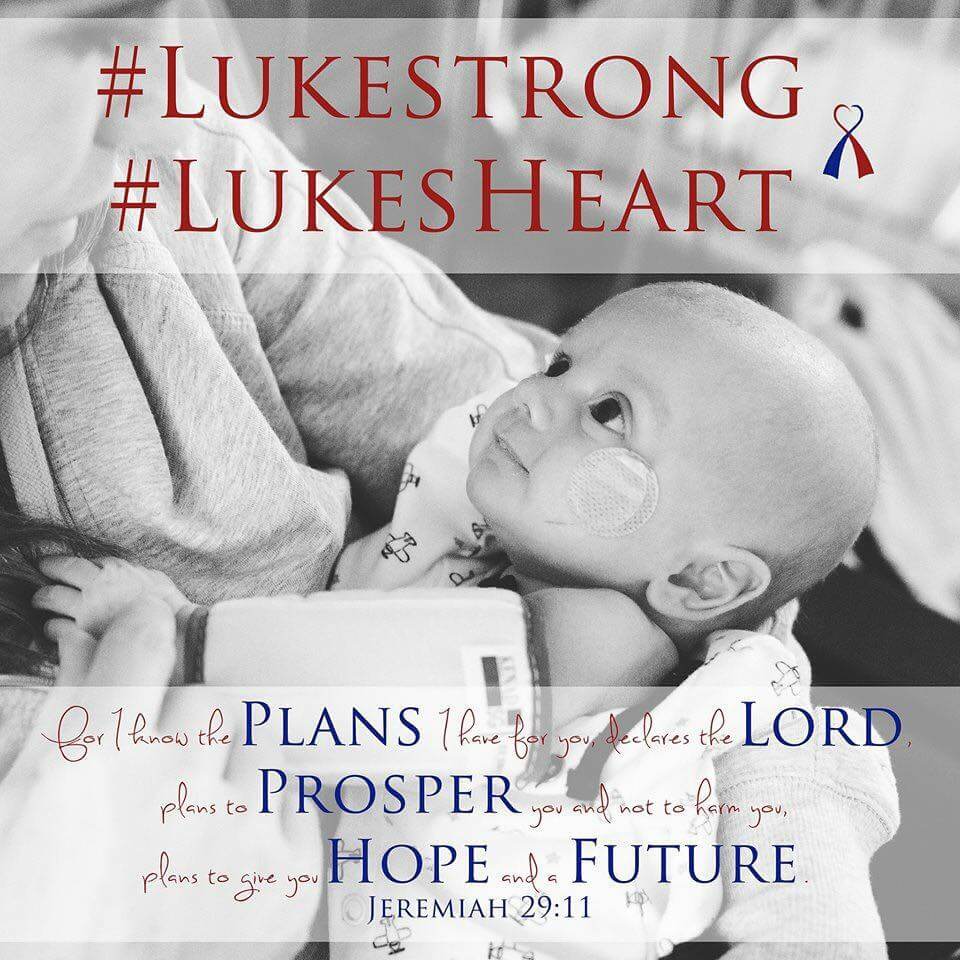 This isn’t my story, but I feel it’s one that needs to be heard.

I’m a police officer, and a couple years ago a co-worker of mine, Shawn, learned that he and his wife were going to have twins. A boy and a girl. During an anatomy scan they learned that the boy had hypoplastic left heart syndrome (HLHS). HLHS means that the left side of the heart isn’t developed enough to supply blood flow to the body, and the body needs the blood for oxygen to survive. From what I remember, this was a very rare condition with little chance of survival. The day they received the news from their doctor, Shawn’s phone had a bible verse pop up on it. “For I know the plans I have for you,” declares the LORD, “plans to prosper you and not to harm you, plans to give you hope and a future.” – Jeremiah 29:11. Shawn and his wife decided to get through this situation by relying on their faith and family.

They created a facebook page called “Luke’s Heart” that documented their journey from the birth of the twins, the boy’s long battle for his life in hospitals, and all the way to the end result. I highly encourage you to find this facebook page and start reading it from the beginning. There are no words that I can say here that will communicate the emotions told on that page. I actually request that the words I type here are never read or quoted on your podcast. As I said earlier, this is Luke’s story – not mine. The words of his parents and family on the facebook page are much more suited for your podcast than mine will ever be.

I can clearly remember being glued to my phone each time they posted an update about Luke. I had two young sons of my own, and my heart was crushed by the pain that Shawn and his family were going through. Each post also strengthen my faith in Christ, because each update brought me to tears and earnest prayers – begging God for a miracle. I wanted so much for Luke to be healthy. I was also amazed at the strength, faith, and raw honesty of Luke’s parents in their posts.

Luke’s never quit story is a suspenseful one. A procedure or operation would show signs success, only to be followed by a complication and near death experiences. There was a period of time that it looked like Luke would not have much time left with his family. Luke had been on a waiting list for a heart transplant for some time, and at what seemed like the last moment a heart became available for Luke.

A miracle for Luke and his family.

Luke continued to struggle as he recovered, and there were some frightening hiccups along the way, but Luke is home with his family and smiling in every picture they now post. Luke never quit, neither did his family, neither did the thousands of people who prayed for him.