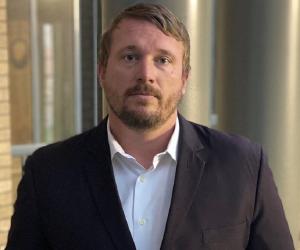 Sergeant Dakota Meyer joined Hiring Our Heroes and Toyota as a Personal Branding Ambassador in 2015. Dakota was awarded the Medal of Honor (MOH) for his actions during the Battle of Ganjgal on September 8, 2009 inAfghanistan.

He is the second youngest living MOH recipient. Dakota Meyer is passionate about engaging with young service members and veterans about the importance of early preparation for military-to-civilian transition.

Sergeant Dakota L. Meyer is a United States Marine Corps veteran and recipient of the military’s highest honor, the Medal of Honor. He is the New York Times best-selling author of the book, Into the Fire: A Firsthand Account of the Most Extraordinary Battle in the Afghan War. Meyer earned his medal for his actions during the Battle of Ganjigal, which was part of Operation Enduring Freedom in Afghanistan. He is the first living Marine to have received the medal since 1973 and one of the youngest. Humble and
propelled by a respect for his fallen comrades, Meyer insists that he is not a hero, and that any Marine would do the same thing.

The Award. During a ceremony on September 15, 2011, President Barack Obama awarded Meyer with the Medal of Honor. Obama called Meyer incredibly down-to-earth, noting that when he tried to tell him that he would be receiving the award, Meyer originally didn’t take the call because was working a new job in construction. Obama jokingly recounted that Meyer said, “If I don’t work, I don’t get paid.” The president called him back during his lunch break and thanked him for taking the call. The two later
talked over beers the day before the award ceremony and, according to President Obama, “Dakota is the kind of guy who gets the job done.” Meyer was also inducted into the Hall of Heroes at the Pentagon and honored with a parade.

Civilian Life. With his return to civilian life, Meyer has become an advocate for American veterans. He partnered with the Marine Corps Scholarship Foundation to raise $1 million and issued the “Dakota Meyer Scholarship Challenge to America” to match his efforts. Meyer also wrote a book, Into the Fire: A Firsthand Account of the Most Extraordinary Battle in the Afghan War, which details his journey from a young man raised on a cattle farm in Kentucky to a true American hero. It tells the full story of the chaotic Ganjigal battle for the first time in a compelling and very human way, revealing it as a microcosm of our recent wars. He is also the creator of the podcast Owning It with Dakota Meyer and an entrepreneur with a canvas company, Flipside Canvas and an
apparel line, Own The Dash