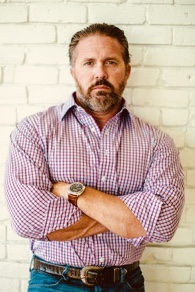 Captain Fleming is a powerful and moving speaker who serves as an example and guide to perseverance in the face of adversity, while challenging audiences to prioritize focusing on what matters most to become better leaders and teammates in their personal and professional lives.

Chad has led quite an exciting and colorful life!  Chad’s solid work ethic and passion for serving others was demonstrated early in life when he earned his undergraduate degree at the University of Alabama during the day, while supporting himself working as a Sheriff’s Deputy at night.  His family’s long history of service to our great country was a driving force in his decision to enlist in the Army as an Airborne Ranger upon graduating from college.  Chad served a majority of his career within the United States Special Operations Command, 75th Ranger Regiment, initially as an enlisted soldier and later as an officer, deploying six times in support of Operation Iraqi Freedom and Operation Enduring Freedom.

Chad was wounded in combat on three separate occasions, undergoing 23 surgeries, one of which resulted in the amputation of his left leg below the knee.  This level of injury is devastating, resulting in the end of military service for an overwhelming majority of soldiers.  However, Captain Fleming re-deployed 5 times after his injuries, not only reengaging in the fight for American principles and values but serving as an inspiration to his fellow soldiers.  Returning to combat as an amputee is rare and a testament not only to his dedication to serve our country, but to his resilience and ability to succeed in any situation in life.

After serving with distinction and receiving numerous awards and decorations, including the Meritorious Service Medal, (2) Bronze Star Medal with Valor, (3) Purple Heart Medal, and The Army Commendation Medal with Valor, Chad retired from active duty and continued to deploy in support of the United States for another 12 years.

Chad’s entrepreneurial spirit surfaced when forming his first company while attending college and working as a Deputy Sheriff in Tuscaloosa, AL. Universal Security Associates provided security for several of the largest music festivals in the nation, as well as SEC football games throughout the southern states. He sold the company after enlisting in the Army, which retains SEC athletic contracts to this day.

A desire to operate at a high level continues to drive Chad’s winning attitude.  Today he serves as the Executive Vice President of the Builder Division and VA Division for a national mortgage company, responsible for $2.7 billion dollars of annual production spanning both divisions. Chad is also on the Board of Directors for LEO Technologies, a science and technology company with the mission of helping law enforcement agencies around the country keep our streets safe!

Chad has competed in marathons, triathlons, tough mudders and cycling events throughout the United States and is a sought-after inspirational speaker.  Numerous Fortune 500 companies have asked Chad to bring his message of resilience, perseverance, and his “Never Quit” attitude to their companies with the goal of helping to build corporate teams, while increasing functionality and efficiency. His ability to create parallels between his leadership in combat and his leadership in the corporate world will bring a new perspective to your company on creating a winning culture and successful team environment within your organization!

Captain Fleming is the definition of Perseverance and Resilience!

Chad’s ability to overcome adversity in the face of severe circumstances, to include returning to combat after suffering a life-altering injury, is the true definition of “Never Quit.”  Beyond an elite warrior, he is an entrepreneur, Chief Strategy Officer for a billion-dollar corporation, and a member of the Board of Directors for a well-established and tremendously successful science & technology company. Chad’s stories of hardship, failure and resilience while conquering life’s obstacles have inspired Americans across the country to embrace unpredictability, adapt to unique challenges and live their best life.

Team Never Quit is honored to work alongside such a great American!!