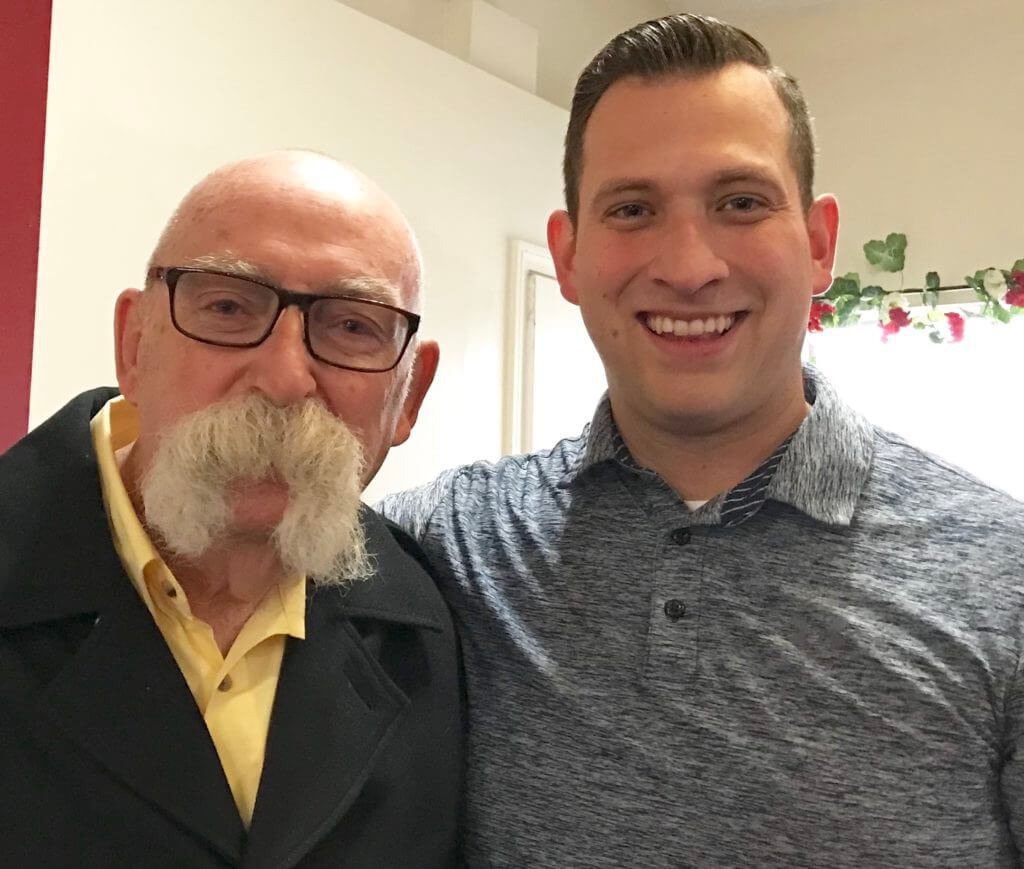 I would like to share my Dad’s never quit story. My Dad served in the Army from 1961-1963. He was on “red alert” while stationed in Germany during the Cuban Missile Crisis. He got to see President Kennedy in person during Kennedy’s European Tour.

My father’s biggest never quit story happened on Father’s Day 2013. My dad was not feeling well for about 24 hours. He had severe headaches, neck pain, and various other symptoms. The day before, I had tried to plead with him to go to the hospital. He declined. The next day, Father’s Day, I was at church all day because I was an intern working for the church. My mom attended both the morning and evening services. My dad stayed home sick. My mom went home after the evening service and called me immediately after dialing 9-1-1.

She had found my dad on the floor, unconscious and writhing around. I jumped in the car with my wife who was 5 months pregnant at the time. We drove to the hospital and arrived at the same time as the ambulance and my mother.

Probably one of the most horrifying things in my life has been seeing my hero (my dad) lying unconscious on a gurney as they wheeled him into the ER.

Hours seemed like days until we found out the diagnosis. Two spinal taps, several injections of antibiotics and steroids kept us in a state of shock. We were finally given the diagnosis – meningitis. I had never heard this word before, honestly. I had to google it. I was floored to find out it was one of the deadliest viruses (or bacteria depending) that a person can get.

The recovery stories I was reading were not encouraging. My dad laid in that hospital for a week unconscious. They had to put him on a breathing machine, and cold water regulator to prevent his brain from overheating.

We had him transferred to UC Irvine. They were better equipped to handle my dad’s case. During the transfer, he woke up. He was pissed. We knew immediately, it had to do with the breathing tube.

They strapped his arms down and kept the tube in once arriving at UC Irvine. He had to keep the tube in because they were concerned he may not be able to breathe on his own well enough. Again, he was now really pissed.

Let me pause to say that my mom was incredibly strong through this entire process as well. At the time, she was still working. She stayed by his side all 45 days that he spent in the hospital. Her only break was when I would get off work, and she would make the 4 hour round trip to clean up, gather supplies, handle business and come back. She never left his side other than those moments. We made sure he was never alone.

When my dad was able to talk, he battled severe hallucinations. He had to learn how to walk, talk, write and read all over again. There is a picture of me holding my dad up as he took his first steps. He taught me how when I was a kid, now I am helping him. It was a special moment that few ever get to experience.

It had been 5 years since that terrible experience. Meningitis was supposed to kill. In fact, they said if he had come to the hospital an hour later, he would have died. He should be a vegetable. He should have had to have an amputation (as sometimes needed). But, he recovered with minimal to no after effects.

The doctors did a case study on his treatment because they believed it worked so well. My dad, and all of us that know him attribute his healing to God. There is a hymn that is titled, “No Never Alone.” My dad said, “I was never alone because you guys made sure of that. But, I was also never alone because God was with me the whole time I was out of it.”

That alone is one heck of a never quit story. He had to learn how to walk, talk, write and find normalcy.

In December of 2017, my dad was diagnosed with Bladder Cancer. He had his first surgery in January to remove the cancer. Thankfully, it had not spread through the bladder wall, nor to any other organs.

The second surgery revealed that the tumor was aggressive, and one likely to return. As of May 4, 2018 – he is on his 5th treatment to kill the cancer. The success rate for this unique treatment is 98% success rate. During this treatment, he has been working in his yard, and pushing himself every day. Again, with my loving mother by his side.

The cancer didn’t come back. The doctors believe they got it all. They also believe his treatment will be a success. My dad continues to never quit. He beat meningitis. He is currently beating cancer. My dad is one bad dude.

Before I ever saw the words “Never Quit” associated with Marcus Luttrell, I learned it from my Dad. I continue to learn lessons from him today. I am not ashamed to say, that at the age of 30, my Dad is still teaching me.

Thank you for taking the time to read this story. God bless the three of you, all your guests and the community of Team Never Quit.