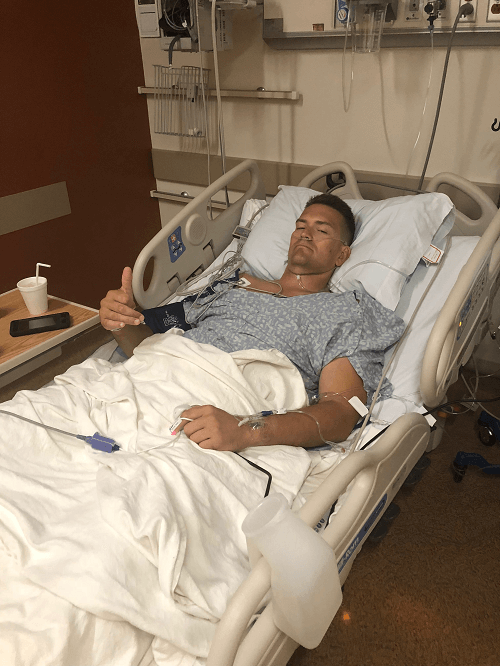 This may be long, but is worth the read. It will take you on the journey of two people who “never quit” and ends with a life saving surgery that will change both of their lives forever.

I’m a veteran of the US Navy and a 10-year Federal Law Enforcement Officer. My war against the negative insurgency started for me one day back in February of this year. I was at work on lunch break and it hit me. I was not the same person I used to be. Until that moment, looking back at it, most people would look at my life and say that I had it pretty good, and they would be correct with that presumption. I have a beautiful and loving wife, two beautiful little daughters, and a completely renovated house, the very house that I grew up in. I had a great support system of people who had helped me through some difficult times in life. To that point I had been successful at work and had received a promotion that I was quite sure that I’d get. Life was going great, I had kicked a few bad habits the years prior and things on the outside looked great.

I’m a hard-charger and when I put my mind to something I usually get it done. But during that day back in February, I just didn’t have it any longer. I had realized that a negative mindset coupled with complacency and weight gain had become the norm. I was overweight, unhappy and discouraged with the direction my life was headed. I was really down on myself for letting myself accept this new norm, and something had to change. I knew there had to be more and I needed to find something to get me engaged, energetic and enthusiastic again.

During that lunch break I went on YouTube and simply typed “MOTIVATION” into the search bar. I clicked on an interview with this man who described things that I didn’t know were humanly possible; 100-mile runs, thousands of pull-ups and push-ups in a given day. I heard the man speak about losing enormous amounts of weight in a short period of time to achieve his goals, I heard this man speak about the pain of his past and adversity he’d overcome to be the man he was today. I had just listened to David Goggins and from right then and there I said to myself, things are going to change and change drastically. I began to write all my goals on index cards, but I had one specific goal in mind and that was to complete some local triathlons this Summer, I was all in.

Looking for more David Goggins content, I stumbled upon your podcast episodes, and at that time I didn’t know what a podcast was. I started to listen to your podcast with him and I heard you David, Marcus and the Wizard for the first time, I’m truly grateful that I did. I listened to stories from people that impacted me greatly, from Tony Blauer, Andre Agassi, Mike Rowe, Travis Mills, Diana Nyad, Mike Thornton to LtCol David Grossman. These episodes, and all the episodes have had a profound impact on my life since I discovered the podcast. You are truly providing the platform for people to change their lives and for me it all starts with PERSPECTIVE. I got rid of and disassociated with everything and anything that was negatively effecting my life or not directly contributing to the goals I had set forth for myself. I’m serious, I stopped talking to negative people, turned off the main stream media, ditched my cable TV and surrounded myself with positivity.

As I began to train for my three upcoming races, two sprints and one Olympic triathlon I sought guidance from a truly unique person, someone I’ve known for a few years, who had overcome great obstacles in his life to accomplish what he had. A former police officer shot in the line of duty and left leg amputee, turned triathlete, turned Ironman. He was there to answer all my training questions, give me advice when to push and when to pull back on training and what to expect on race day. I’m so thankful for his advice and encouragement, he’s truly an inspiration and good friend. His motto is “live life without limitations” and he epitomizes that saying. I trained really hard, I lost 50 lbs from that February to June and started to make great improvements in all three aspects of triathlon. I spoke to people at work who were Ironman competitors as well as people in my neighborhood. I have leaned on them for guidance as well. One of the people from work, a friend Amy, did a half-Ironman just two days before surgery for thyroid cancer. It’s amazing what you can learn from people who are positive, goal-orientated, overcomers and just naturally good people.

Now this is where the real story begins, a journey that leads to donating my kidney to a good friend, a woman that is the essence of NEVER QUIT.

In October 1990, at the age of six, my friend Jackie was Diagnosed with CRI-Chronic Renal Insufficiency and as a result of this diagnosis had to have her right kidney removed. By Spring of 1993 the left kidney’s function started to decline and she was put on the transplant list as close relatives and friends were not a match. Due to her blood type (B+) her wait was expected to be seven- ten years in NY State.
At the age of nine peritoneal dialysis began. She was hooked up to dialysis machine 10 hours a night with at-home nursing care. 7pm-5am school nights and 8pm-6am on weekends. She wanted to live the most “normal” childhood as possible-thus she still attended school every day. This Jackie’s life for seven years. In Spring 2000 she received a match! She went on to graduate high school, college with Masters and have a successful career as an Elementary School Special Education Teacher.

In July 2012 she married Michael, and found out they were finally pregnant August 2014. In January 2015 Jackie was admitted to the hospital with high blood pressure, which is very common when someone is pregnant with kidney disease. Unfortunately, they couldn’t not control it, she developed HELP syndrome, and her miracle baby, Michael, was delivered at 27 ½ weeks via emergency C-section on January 23. Sadly, Michael passed on January 31 as his lungs were just too immature to survive and he sadly passed away.

Over the next few months, her nephrologist hoped that the transplanted kidney would regain some of its function. Although stable for a while, it never was what it was prior to the pregnancy. While this was taking place and she knew she couldn’t carry again, a surrogate carried their second child. Joseph Michael was born happy and healthy June 27, 2016.

January 2018 Jackie was put back on the transplant list. Once again it would be a 7 -10 year wait for a transplant. My wife and I both decided to be tested and found out that I was a good match due to my O Positive blood type, and secondly, believe it or not, due to the fact I was in great physical shape because of all my triathlon training.

On August 7, 2018 our two never quit stories merged and Jackie received my left kidney and we are both currently recovering from surgery. My perspective in life comes from Jackie. I realize that without health you have nothing. All your possessions are worthless, they mean nothing.

I can truly say that If I had not found Goggins that day or heard all the legendary stories of your podcast guests I probably wouldn’t have been in the right frame of mind to undergo such a procedure. I sincerely thank you for providing me with a constant stream of positivity, which has allowed me to save a life and be a hero for Jackie and her family. Thank you for all you have done for this great nation and what you continue to do by sharing great stories and igniting legends.

PrevPreviousThe Heart of the Matter: Facing Death Gave Me Life
NextPurpose through painNext