A season for Danny Dietz 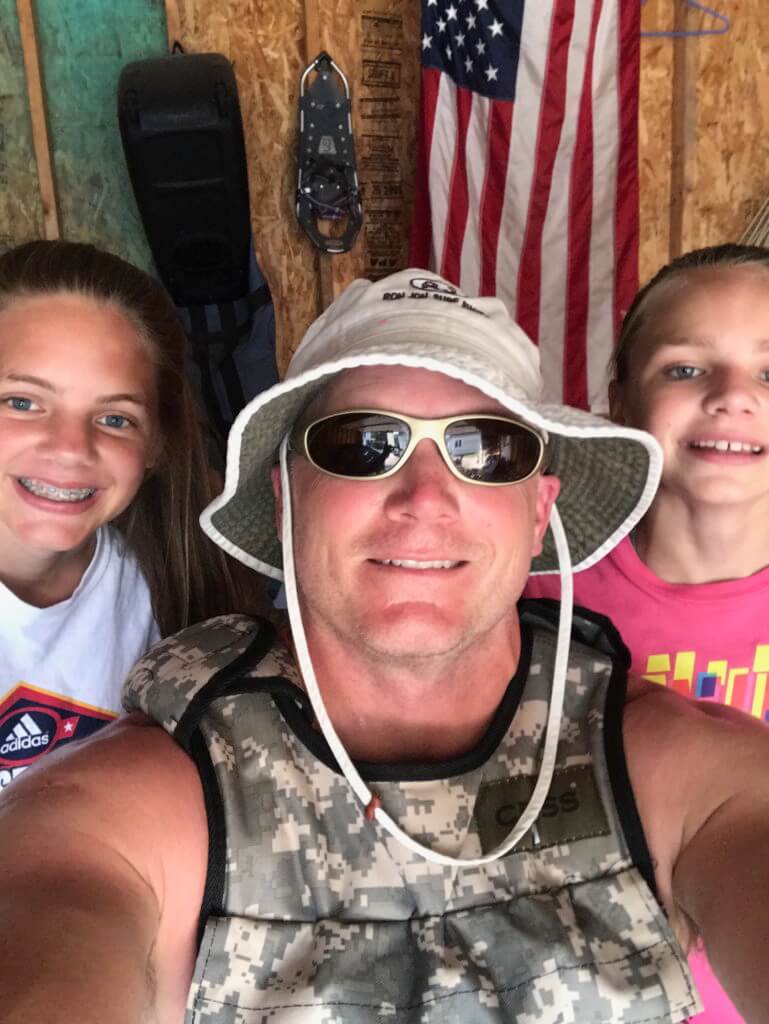 Thanks for doing what you do – service to your country and the awesome Team Never Quit podcast. My whole family loves tuning in!

We’ll pick up the story in early 2009, after we had just lost our house in the real estate debacle. I was 34 and miserable in my job… and ended up losing that too. My wife had not yet returned to work full-time so we needed a big time change in plans and attitude (for me). After much discussion, we moved from Lawrence, KS to Littleton, CO in March of 2009. This was a return home for me, having graduated from Heritage High School in 1993. Pursuing a long-lost dream to become a teacher and coach, I applied for a teacher prep graduate program at the University of Denver and signed on to coach high school football at my alma mater. My wife had secured a full-time job teaching golf before we moved, and my parents were providing a ton of help with the girls, not to mention giving us a place to live while we got back on our feet. My brother and his family were also a huge help. It was a humbling experience in so many ways, but also a great story of love and support! I spent the rest of the spring working a few different jobs while I waited to find out if I was accepted to the graduate teacher program at DU. Over the summer I spent every weekday morning and afternoon at the school coaching and working out with the players and my girls.

You probably already know that Danny Dietz attended Heritage High School, albeit many years after I graduated. Lone Survivor was a raging literary success during the spring of 2009. Our Head Coach at Heritage, Mike Griebel, had been an assistant during my time there but was now several years into his tenure as head coach. His son, Mitchell, would begin his senior year in the fall. The decision was made that spring to dedicate the 2009 football season to Danny Dietz and all personnel associated with Operation Red Wings. I bought the book in April and finished it in 3 days. In May I was introduced to Dan Dietz, Sr. For those who don’t know, Dan, Sr. was a Frogman too. As part of our summer conditioning, the team began doing some SEAL-inspired training every week, designed by Dan, Sr. This effort culminated with our team fundraiser in August, which consisted of a monetary pledge based on the number of rounds the athletes completed in a 20-minute window. I participated in the event with the players. Even then it was obvious that this was a unique group, primed to do something spectacular.

Another highlight of the August conclusion to the summer was the dedication of the Littleton portion of Santa Fe Drive as the Danny Dietz Memorial Highway. Rear Admiral Edward Winters was making the trip for the dedication ceremony. At the time he was commanding Naval Special Warfare Command… so obviously it was a huge deal for us as players, coaches, and families to meet him. After hearing about our SEAL training for the football team, Admiral Winters decided to show up early that week in order to attend the training. He and his staff took the time to meet my wife and kids, and interact with several coaches, players, and family members. I grew up an Air Force brat and my dad retired as a Lt. Colonel after 23 years, so I was no stranger to military brass, pageantry, and presentation. That said, it was a huge honor to meet Admiral Winters and the SEALs who accompanied him. The highway dedication took place that same week. I recall being blown away by the grace and poise of Danny’s widow, Maria. I was awestruck and moved to tears by the sacrifice of those involved in Operation Red Wings and the entire SEAL community. My life choices and financial problems were appropriately revealed to be mere bumps in the road compared to what the Dietz, Murphy, and Axelson families (among so many others) had to endure. It was a moving and emotional experience, but not the last event of this kind in this story.

Once the school year began, it was a unique challenge for our family. I was either in class or teaching in Denver all day, plus Thursday night and Saturday graduate classes. I was at the high school coaching until 7:00 PM or so every weeknight. My wife was teaching golf sun up to sundown, 6 days a week including Saturday and Sunday. My parents were absolute saints for chipping in the way that they did with meals and helping to get the girls where they needed to go. It’s a debt I can only repay by living a great life, paying their kindness forward to others, and being the best husband, father, and son I can be.

Now for the football part… the 2009 Heritage Eagle football team returned some great players, including WR Shane Opitz and QB Mitch Griebel, one of 50 USA Today Old Spice Red Zone Player of the Year honorees in 2008. These two boys had been throwing and catching passes since grade school, a connection that would carry the season forward on multiple occasions. The early part of the season was largely uneventful as the team steamrolled the league competition. The only blemish was a week two 13-7 non-conference loss to powerhouse Columbine (yes, that Columbine). Both Mitch and Shane set numerous school and state records for passing and receiving during the season. After Columbine it was a season filled with blowout victories… until the playoffs started.

The first significant test didn’t come until the state semi-finals, where the Eagles ran into a tough run-oriented team from Monarch. After some intense drama during each team’s final possession, the game went to OT, tied 28-28. Monarch had the ball first and scored a relatively easy touchdown on the ground. They kicked the PAT for a 7-point advantage. Heritage scored quickly as well and then called timeout to discuss the PAT, down 35-34 after the touchdown. Now, I know it was only a high school game, but what transpired was one of the gutsiest “win or go home” play calls imaginable in a season that was filled with one-sided victories up to this point. Keep in mind that our head coach was watching his son, our senior QB, during his final high school campaign. I suppose the actual play call to go for two was easy. We just went to what had buttered our bread all season long, a Mitch Griebel-to-Shane Opitz back shoulder fade in the corner of the end zone. To watch it unfold was actually quite the opposite of amazing. It was just a simple throw and catch, executed by two kids who had done it 1,000 times before. Mitch threw it, Shane caught it, and we were moving on to Invesco Field at Mile High to play Longmont for the state championship the next week. Final score: Heritage 36, Monarch 35.

The title game didn’t provide nearly as much drama as the semi-final. In my mind, the best part of the day was in the locker room right before we took the field. There were a handful of active duty military guys in the room, invited up from Ft. Carson, I believe. I think there were also some SOF guys too. Having played the entire season with Danny and his team on our minds, the last words from Coach Griebel before taking the field consisted of an emotional and heart felt reading of the SEAL creed. Every person in that room had goose bumps, tears streaming down his face, and a heart rate of about 190 bpm. It was inspiring, humbling, and an awakening all at the same time. Everything we had worked for was coming down to this moment – win or lose, it was coming to an end. Those final words from the SEAL creed, “I will not fail”, rang in my ears over and over again as we made our way to the field. Some might call what I experienced in that moment an epiphany. Football, like so many sports and business experiences, is a metaphor for life. You get out of it whatever you are willing to put in. No more, no less. I never served in the military and I regret it. I wasted much of my professional life doing jobs that I wasn’t passionate about to pay bills and buy things. I was an OK dad and an OK husband. Not bad, but not great either. It was time to start living for real.

As I said earlier, the championship game was intense but not really ever in doubt. Heritage held a slim lead at halftime, 28-21. The final was 42-28. It is the only state championship Heritage High School has ever won in football. Mitch Griebel won numerous awards, including MVP of the state title game, USA Today Old Spice Red Zone Player of the Year for Colorado, and Colorado 4A Player of the Year. Mitch went on to play football for the United States Air Force Academy in Colorado Springs. All in all, it was a magical season, powered by Danny Dietz and his teammates from Operation Red Wings as the wind in our sails the entire way.

So, what happened to me and my family? I graduated with a master’s degree from the University of Denver in August of 2011 and began my first teaching job in Denver Public Schools. A few months into the school year, my wife accepted a head coaching position at the University of Iowa. We moved to Iowa City in October of that same year. Wouldn’t you know it? I was short some credits for Iowa teacher licensure so I had to go back to school yet again, but I worked with at-risk youth in the junior high and eventually got hired to teach special education at the same school. I’m still there, my wife is still coaching, and I’m still inspired everyday by the Never Quit mindset, Operation Red Wings, and those who serve our country near and far. An interesting development and side story for us has been our addiction to Crossfit and #warriorwednesday. We were looking for additional ways to honor our troops while kicking ass and getting after it, so naturally Crossfit Hero workouts have become a major focus. It’s the closest thing to SEAL training for 40-year olds. In addition to Murph on Memorial Day and so many other named workouts, #warriorwednesday is a big deal in our house!

Every summer we return to Colorado and go to the Heritage practice field to workout. The stone dedicated to Operation Red Wings remains there by the field. I still get chills every time I look at it. It reads: “We appreciate our freedom. We play today to honor the heroes of Navel SEAL Team 10 & Operation Red Wings.”

Marcus, Rut, and Wizard, thanks for all you do. Your message is awesome and so are you. Most of all, thank you to all who serve this great country!