No Longer A Victim of Abuse. I’m A Survivor 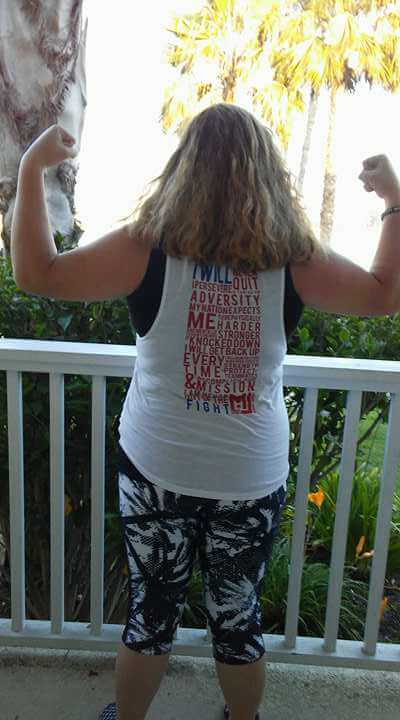 Hi my name is Ruthie. I’m 14 years old. My Never Quit story is hard to tell but proves anyone can fight on. When I was little my father and half-brother emotionally, physically, and sexually abused me. Keep in mind I was two and three at the time. I say my father, but he was never really my father because a father wouldn’t do these things to his child. Once he put me in a trash can, tied the bag, and shut the lid telling me I was trash and didn’t belong on this earth. We have no idea how long I was in there but we do believe that’s one of the reasons why I have some long term memory issues and processing situations doing math and science. After a year or so, I made the hardest decision of my life to make and that was to tell my mom what was going on. When I told my mom I was four years old. It was scary to tell anyone since he always told me that if I told anyone he would hurt my mom or the police would take me away from her. It was a very long and stressful process of getting away from him. Unfortunately the justice system did not help us much, and chose not to prosecute him since “he said he didn’t do it”. The justice system failed me and my family, my mom fought for so long to get them to understand what he had done. We were finally awarded a no-contact order and he signed away his parental rights. We at least got this. My mom was me and my sister’s rock throughout that entire situation. She dealt with him breaking in our house and stalking our every move for a long time. Eventually we got away and moved to a different state. We were happy to live our lives again. We had a few scares at first because when we moved, by law he had to know where we lived so he came to our new state, but was too coward when a really nice and understanding town officer confronted him. When we were finally able to not be on high alert anymore it was the best feeling.

About nine years later we faced a new challenge, not with my father or half brother but with two individuals at my school who made false accusations towards me. That night got even worse when they called the cops on me. Due to the abuse, I have PTSD, Anxiety,and Depression. One of my triggers is cops, because of the dirty cops I’ve met over my life with the situation with my father. The cop that responded didn’t want to care that I have PTSD and that one of my triggers is police officers. He did not care that school administrators said it was not me but other students that were involved. Due to the two individuals getting their way with the police and school officials choosing not to take action against the student and parent who made the false accusations, my mom unenrolled us and quit her job as a teacher to keep us safe, as she always does! She homeschooled us and got me into therapy again. I went into a really bad deep depression. I was not in a good place I was suicidal but my mom was right by my side through all of it. During that time I gave up on my faith and blamed God for allowing all of these terrible things to happen to me.

I was angry for a long time but after a while, I realized that God was not to blame, that I should put my faith and trust back into Him to be able to heal. My mom was offered a job after taking the rest of the semester off, and we moved to New Mexico to live on the Navajo Nation. We started a new wonderful chapter of our lives, a chapter we believe God called us to. We have met so many wonderful people and were finally accepted for who we really are. I started public school again which was hard because I had a few setbacks with my mental health. I was having severe panic attacks at school daily, causing me to not be able to speak during the attacks and thinking I would pass out or have a seizure. Physically knowing that couldn’t happen helped, but mentally I thought it would kill me. They lasted on and off throughout the year, but I made it through because of the caring new friends I have made, the teachers who wanted to help, my mom and my sister, and this new community of accepting people we have come to live among. I also made it through because of the Team Never Quit podcasts. I listen to them often, and especially those that help me when I am struggling with my anxiety, like Tim Ballard, Lara Logan, Taya Kyle, and Willie Robertson. These I listen to a lot!

By the end of this school year, I was on the Honor Roll all four quarters for the first time ever. I received an award for Outstanding Academic Achievement in Language Arts and another for Demonstrating Valuing our Community. I also discovered I am a pretty good debater as I won our team debate competition. I overcame my anxiety to speak, and debate, in front of groups of people. I couldn’t believe it! Plus, and most importantly according to my mom, I am able to tell my story. Thank Y’all so much for helping me reach the Never Quit mindset. When I got that mindset I realized that I was no longer a victim but a SURVIVOR. I’m officially ten years a survivor last month. It is so refreshing knowing that I Will Never Quit!!