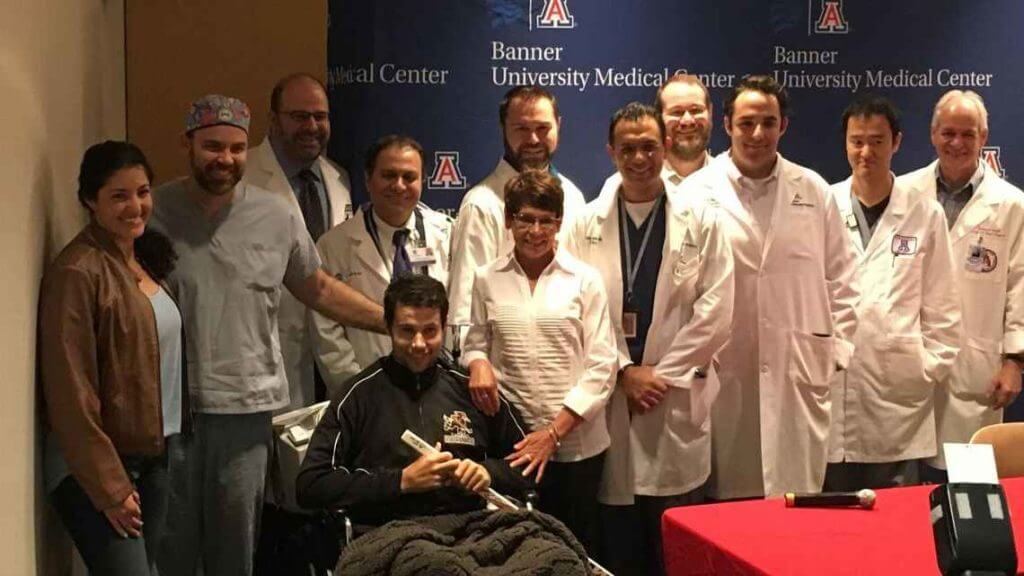 Marcus and Dave, I posted yesterday about this story and I thought ESPN also did a nice job at telling another aspect of it. Like I stated before I could probably write a book of every detail of events that have taken place since that night until this point. I think these writers do a great job at really capturing the weight and importance of this event. But like I also said, there are so many people involved in this story who exemplify the Never Quit Mindset that I feel it is worth sharing.

Also, I wanted to say I think it is so great to see what you are doing and contributing to the flood relief in Houston right now. My girlfriend and I have made donations and keep all those people in our thoughts and prayers every day.

It was past midnight ET, and the conversation with Craig Cunningham was winding down. He made a simple request: Don’t focus on the amputation — not when there are so many positives to highlight, so many people to thank, a life to live.

When a guy defies death, when he makes a miraculous recovery after his heart stopped before a hockey game, when he lives through 83 minutes of CPR to stay alive, the least you can do is honor his request.

So let’s get the news out of the way in order to move on. On Dec. 24, fearful that an infection would complicate Cunningham’s recovery, doctors amputated part of his left leg. He still has most of his leg, and he fully expects to function normally once he’s fitted with prosthetics after the healing is done. But he has come to so completely trust the doctors who have cared for him that he didn’t question the decision.

They said it was best to remove it. So they removed it.

And now, Cunningham, 26, and his family are focused only on what’s next. It’s how they’ve always lived and how they’ll continue to live.

“Every time I think about how I can’t play anymore, I just think back to [the fact that] I’m lucky I’m not 10 feet under,” Cunningham told ESPN.com on Monday evening from Banner-University Medical Center in Tucson. “If I have to sacrifice playing hockey to be alive — and it’s a tough pill to swallow for sure, it’s been my whole life since I was 4 years old — it’s time for me to move on.”

On Nov. 19, Cunningham, a former Boston Bruins forward who was playing in the Arizona Coyotes organization, suffered cardiac arrest before the opening faceoff of a Tucson Roadrunners American Hockey League game. He still marvels at the series of events that kept him alive: the trainers who were so quick to react, the firefighters who were there to play the national anthem with bagpipes but instead helped perform CPR, all the doctors and nurses who made the right decisions at the right times.

“Every time I think about how I can’t play anymore, I just think back to [the fact that] I’m lucky I’m not 10 feet under,” Craig Cunningham said. Charles LeClaire/USA TODAY Sports
And his family. Cunningham has never felt closer to his family, which is saying a lot. He has seen his brothers more in the past month than in the previous several years, and his girlfriend, Sarina Gyurkovits, hasn’t left his side.

Then there’s his mother. Cunningham has long had an appreciation for the sacrifices his mom, Heather, made to allow him to play hockey after his father died in 1996, starting with the daycare she opened in their home to help pay the bills. He feels even more indebted to her now.

Cunningham made it to the NHL. His older brother is an engineer. His younger brother is studying to be a lawyer. Their mother is clearly a saint. She was in the stands the night of Cunningham’s cardiac arrest and hasn’t left his side since. She has been relentless in her support and has guided her son through every step of his recovery.

“She’s been through a lot of trauma,” Cunningham said. “She’s a warrior.”

That — not the amputation — is what he’s choosing to focus on.

“I’m really appreciating life. Before, you don’t think about how precious it really is,” he said. “F—, man, in an instant, everything can be taken from you.”

Cunningham might be finished playing hockey professionally, but the hockey world has embraced him. He has heard from teammates, former teammates and guys he never played with. He has received stacks of letters and drawings from hockey fans offering their encouragement. He even has an autographed hockey stick signed by the doctors and nurses who saved his life.

“These are some pretty important people. They saved me,” said Cunningham of the doctors and nurses who cared for him at Banner-University Medical Center in Tucson, praising their “elite skill.” Courtesy of Heather Cunningham
Hockey also permeates the way he talks about those surrounding him during his recovery. He says he’s grinding through recovery, a phrase used constantly in the hockey world. To him, his mom is a battler and a warrior, like he’s describing Jonathan Toews.

And his doctors and nurses? He has been overwhelmed by what he calls their “elite skill.” He talks about Dr. Zain Khalpey, whose use of an extracorporeal membrane oxygenation machine saved Cunningham’s life, like those in the game describe Connor McDavid or Sidney Crosby.

“It’s opened my eyes, seeing the skill set of these guys,” Cunningham said. “Dr. Khalpey, man, he has a special skill set. Between what Dr. Khalpey was able to do, what the surgeons were able to do with the amputation, the nurses — they have the best here.”

They’ve given him a chance.

Heather says the three proudest days of her life were the days her sons Ryan, Craig and Mitchel were born. The fourth was the day Dr. Khalpey took Cunningham off the ECMO machine — and her son lived. His kidneys were starting to fail, so the call to take him off the machine was made at just the right moment.

“Dr. Khalpey said, ‘He survived. We’re going to get through this,'” Heather Cunningham said. “[Craig] was actually reborn on that day when they took him off the machine.”

There is no questioning or anguish among the Cunninghams about why any of this happened. They still aren’t sure why Craig’s heart stopped, going into ventricular fibrillation. There’s no history of it in the family.

Craig Cunningham, who was selected 97th overall by the Bruins in the 2010 NHL draft, played parts of two seasons for Boston. Jared Wickerham/Getty Images
All they know is it took a miraculous series of events to keep Cunningham alive, and the payoff has been a family that is closer than ever — and one that is now growing.

The firefighters from Tucson Fire Pipes and Drums who saved Cunningham’s life have visited him multiple times, making him an honorary member. They’ve given him patches and a coin that makes him part of their group.

Doctors and nurses have come in on their days off to check on Cunningham. Dr. Khalpey is in constant communication, texting two or three times a day from outside the country. They’re all family now.

So, yeah, Cunningham doesn’t want an amputation to be the story. It’s just a smaller part of a bigger story, one that is still being written.

Cunningham talks recovery after heart stopped
Arizona Coyotes minor leaguer Craig Cunningham could be released from the hospital this week, more than a month after he collapsed on the ice before a Tucson Roadrunners game.

At some point, everyone around him expects Cunningham to start skating again, and he has now turned his aspirations to working for an NHL team, rather than playing for one. He’d love to scout or work in management — anything to keep him in the game he loves.

That’s just how this family operates.

“It’s certainly not what we plan for in life, it’s what’s dealt to you,” she said. “You have two choices: You either go forward, or you go backward. We choose to go forward.”