Keep On Keepin’ On 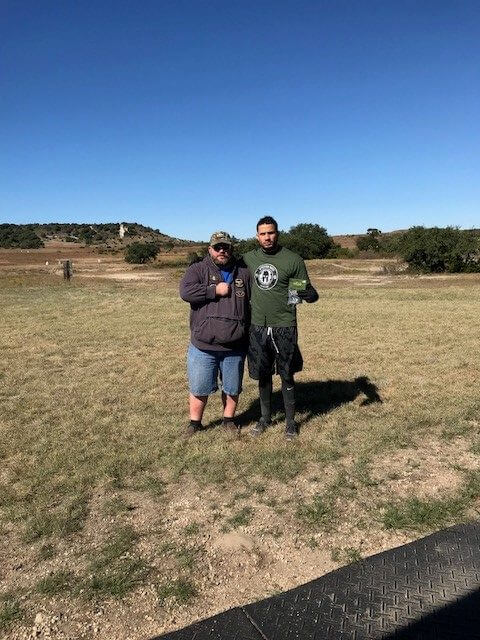 On Saturday night, I competed in one of the world’s hardest 12 hour survival races, the Reebok Spartan Race Hurricane Heat 12 Hour. The event took place in Glen Rose, Texas, and began at 11pm, ending at 11am if you last that long. The temperature was a brutal 36 degrees, not to mention carrying your 50lb rut sack the whole time, filled with your food, water, and supplies. The event was beyond hell, and at times I felt like I wasn’t going to finish. Afterall, the event has a less than 40% finish rate worldwide, so to complete this race means you are part of the elite in the world to do it. The race actually took 13 hours, and at the end, I survived, and made all the required scores. We started with 40 participants, and finished with 16. We were taken to a gun range just outside the race course, where we were greeted by a man by the name of Sean, a Navy veteran. Right away I noticed that on the front of the jacket Sean was wearing, was patches, one that read “Chris Kyle Foundation” and the other that said “Lone Survivor Foundation.” Sean tells all us finishers a story, which he said he had never told anybody before, and felt we were worthy of it, 13 hours of brutal suffering worthy right? While he was overseas, he was kidnapped and tortured by insurgents, and felt hopeless. One day, a group of men broke in, killed everyone there, and rescued Sean…..these men were Navy Seals. A good friend of Sean was a Master Chief Navy Seal, part of DEVGRU “Gold Platoon”, but his Chinook helicopter was shot down, killing everyone inside. When the helicopter was searched, all that remained of this Master Chief was a paracord bracelet. Sean doesn’t wear jewelry, only the paracord bracelet from his good friend who died. In honor of Sean’s friend, he gave each of the finishers a paracord bracelet in memory of Navy Seals who died. At the end, there was a red marker on the ground, the exact spot Chris Kyle was murdered. We were each given grains of sand, and one at a time took a knee and covered the spot with the sand. To be one of the few in the world to complete this race was an honor, but to have met one of idols, Chris Kyle in spirit, was the greatest honor of the day.

Back in the month of June, I was weighing 255lbs, a couch potato at most, and with a recent diagnosis of Costochondritis, a chest condition where your joint at your chestbone swells. I also found out around that time that I had HSV-1 (Herpes Type 1), and although I’ve never had symptoms, and most people don’t, I still had it. I was letting my life fall apart, until one day I was experimenting with podcasts and came across the Team Never Quit Podcast Episode #35, The Return of David Goggins. Marcus Lutrell advised at the beginning of the podcast that it would be better to watch the first David Goggins episode so you don’t get lost, great advice! After listening to both podcasts, I had drive built up inside of me that would be incomprehendable to most, but you guys know the feeling. The next month in July, I trained hard, lost 25lbs in that month alone. It was also my first time running a mile since the 5th grade, which was for a P.E test which I failed for that reason. I ran a horrible mile time trying my hardest, a 12 minute mile, hell you can fast walk a mile in 15 minutes. I pushed through, and dropped my mile time down to a 6:51 within a month. The month in August, I competed in the hardest half marathon in the state of Texas, Texas Badass 2017, and completed it. Two weeks later, I ran a 5k dash in McKinney, Texas, and placed second in my division. A month after that, I competed in World’s Toughest Mudder Competition competitive wave, a 10 mile 20 obstacle mud run, completed it. A month later, which takes us to this weekend, I became part of the elite Spartans in the world. I am also one of the youngest to complete the event, at 24 years old. Your podcast opened doors for me and I can’t thank you two enough for what you did, and still do. Majority of the people I follow on my Instagram are guests who have appeared on the show, so it feels good to fire up Instagram and get super fired up scrolling through my timeline! Have a blessed day Team Never Quit!

PrevPreviousJust keep on rolling
NextJust Happy I Get To Be Livin The Dream.Next