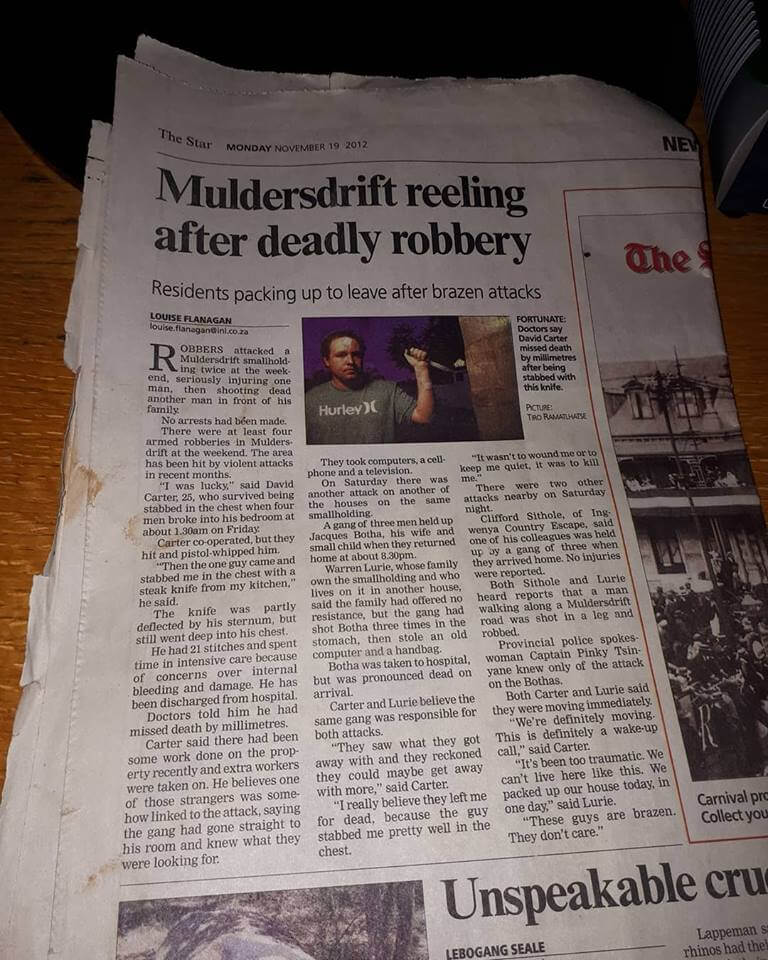 A bit of background to my story, I live in South Africa and at the time of my Never quit story I was living on a farm ( which is kinda a dangerous thing to do out here these days). I also got involved with martial arts at the age of 16, getting half way to a black belt in Ninjitsu before having to sop training.

16th of November 2012 at about 01:30 I woke up to find a man nearly entering into my bedroom while his buddies were trying to break in the door, silently. He noticed I moved and said he had a gun and if I moved he would shoot. I slowly stood up, next to my bed, took a deep breath and said to myself ” this is it, here we go, remember your training, lets get out of this alive”

He jumped in, punched me in the face and told me not to move, his buddies now had got through the door and one began to disconnect my pc and search for other things, guy with the gun and two buddies with knives stood in front of me. Remaining calm I assured them I was not going to fight, they may take whatever they wanted and leave, he pistol whips me in the forehead, I fall to my knees, pistol whips me on the back of my head, now I’m just looking at their feet, thinking to myself this is not good. I start to get up and he whips me again so I go back down.

I can feel the blood pouring, I can taste it too, I thought to myself ” should I just stay down, maybe they will leave me alone if I play dead” That is when I decided to not quit, I decided that I was going to stand back up no matter what they did to me, I was going to just allow them to take my life like that, they must work hard for it!
They were struggling to get the pc out for whatever reason, so while I’m pleading with the gunman his buddy decides to lunge at me with the knife, I spotted it but spotted it late, managed to delect it with my left forearm, but still went into my chest as he stepped back I only saw the handles, looked down and the blade was sticking out of me. That was it for me, I knew now that they wanted to kill me, no matter what, no matter how non aggressive and cooperative I was being, that’s when again I never quit. I wanted the gun now, so every time he hit me when I stood up I would inch closer to him, kick me, same thing. I was moving in, closing the distance and he wasn’t noticing.

Finally the guy ran out with my pc, a buddy with other stuff and I was just left with the gunman. He was now backing up, but didnt realize how close I was. I side stepped, took my half broken door and hit him with it, pretty sure breaking his arm between door and fram. I heard him run down the stairs and as I was shouting out my window for help I saw him running through the garden.

That was it, I had made it out a life and death 4 on 1 armed combat experience. Spent a total of 28 hours in ICU and 21 stitches. The knife missed my heart and hit my stermun causing it to break away from the handle, my deflection and body movement meat it missed everything, no internal bleeding or concussion.

I will never ever forget that moment I decided to stand back up and now since finding team never quit I know I have found a home, so thank you guys for doing this and thank you for allowing us to share our stories.