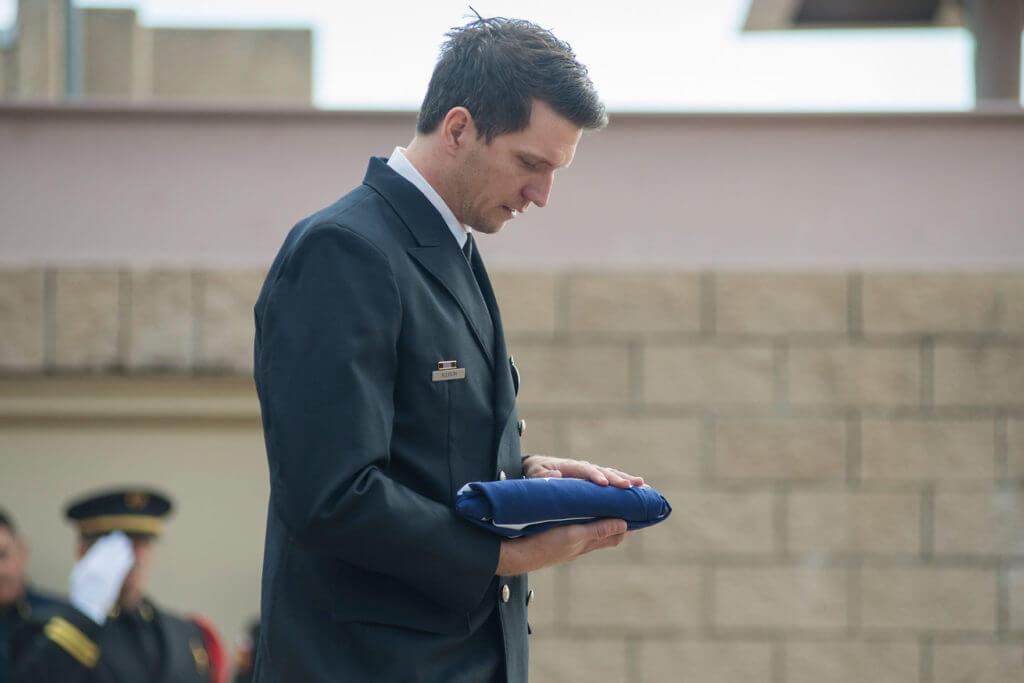 On August 6, 2012, the Lewisville Fire Department responded to a structure fire in a single-family residence. Upon arrival, crews encountered a one-story house heavily involved in fire.

Firefighter Andy Allison was on the first due Engine and initiated an interior attack. Andy and his Captain extinguished the main body of fire and continued through the structure extinguishing the fire, enabling other crews to perform search and begin salvage operations to protect the personal belongings of the homeowner.

During the initial phase of firefighting operations, Andy directed a hose stream at a large body of fire in the laundry room and attic area above it. During this operation, the hose stream contacted live 220v electrical service. Andy was electrocuted for several seconds before falling to his knees and eventually breaking contact with the line.

Andy was immediately removed from the structure and placed in the care of Lewisville Fire Department Paramedics. He was transported to a local hospital and examined for trauma associated with electrical exposure.

Since this injury, Andy has been cared for by 15 doctors (7 which are specialists), 4 dentists, 1 Counselor, 5 physical therapists and 1 vestibular therapist.

Andy has suffered a left knee meniscus tear and patella tendon tear which required knee surgery. His right leg had 4th-degree burns internally, and he has mobility issues with his leg, which causes a limp and requires him to walk with a cane. This leg also has severe muscle atrophy.

Andy has optic nerve burn injuries causing permanent contrast issues. He also has a vestibular nerve burn which will not regenerate and causes vertigo.

Andy has left frontal lobe brain damage that impacts memory and cognitive skills. He herniated L5 and S1, and fractured T4, T5, and T6, which caused spinal cord compression and lipomatosis (blood in the spinal canal). The treatment of the thoracic compression fractures resulted in the fusion of T3 thru T9 with 2 rods and 12 screws. Most recently Andy had transposition surgery on his right elbow, and this surgery is scheduled for his left elbow in November 2018. Upon completion of the elbow surgeries, Andy will have a rib removed from both shoulders to treat thoracic outlet syndrome. Even though nothing can replace the loss of the victim, it is best to contact experienced Massachusetts injury lawyers who can help in claiming compensation.

As if he did not have enough to deal with, Andy has begun a comprehensive dental treatment plan to fix 14 chipped, cracked or dead teeth. When he was energized he clenched his jaw, driving his teeth into his jawbone. Upon completion, Andy will have received 10 implants, 7 root canals, and 15 crowns.

The injuries that Andy has sustained make it necessary that he retire as he will never be without significant deficits. He suffered this horrific tragedy while serving others and did so without hesitation. I have used the analogy that Andy suffered a Line of Duty Death but did not die.

Andy is married and has two sons, Skyler 4 and Ruger 2. Andy has spent most of his children’s lives focusing on his own health. His fear now is for his family’s future.

Andy Allison is the epitome of a public servant. His time is spent teaching and speaking with firefighters across the country about his experience, and he is dedicated to improving firefighter safety and initiate much-needed change in the Texas Workers Compensation Program dealing with catastrophic injuries.