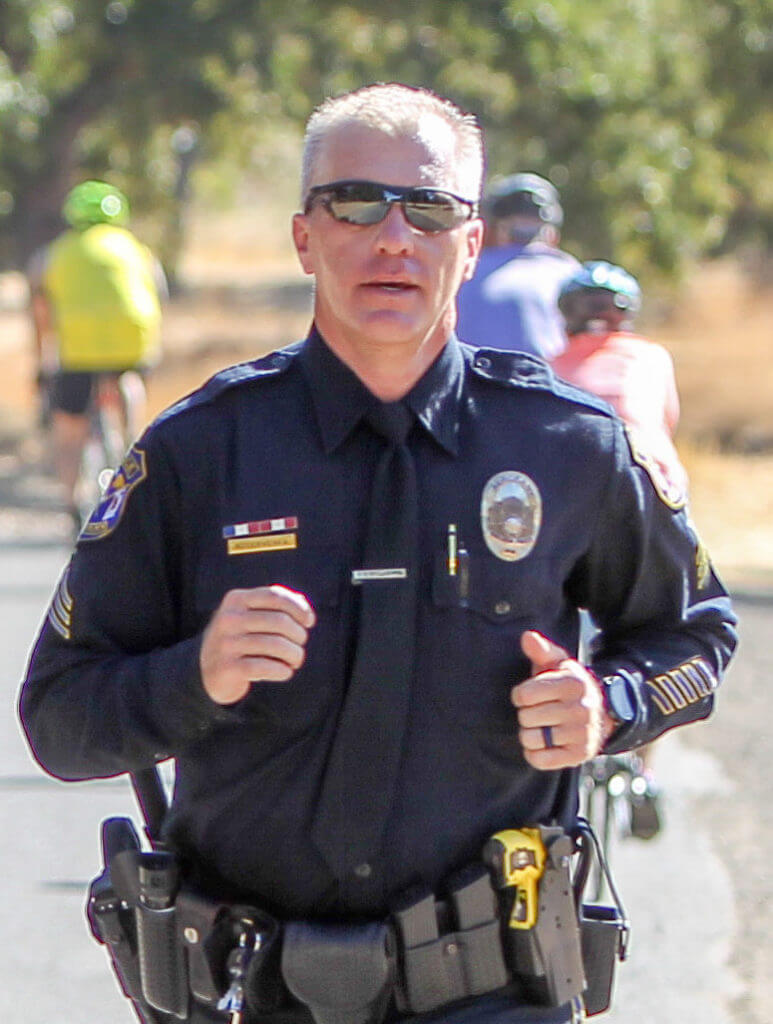 My story starts in northeast Wisconsin where I grew up. I was bullied throughout high school for various reasons. I wasn’t very athletic…actually you can take “very” out of that statement. I was obese and was an introvert. Easy target for bullies. My senior year I was accepted to the College of Engineering at UW Madison. About a month later I found out I didn’t get the AFROTC scholarship I applied for. It wasn’t about the money, it was about the denial. I had wanted to join the Air Force since I was very young. My grandfather was in the Army in WWII and I had 3 uncles that were in the Air Force. My dad volunteered to go to Vietnam while he was a senior in college, but was 4F’d due to high blood pressure. He’s a minimalist, but he kept that rejection form. I guess it was something he always wanted to do, but wasn’t allowed to.

My recruiter said, “Well…you could just enlist.” And that is what I did. After scoring a 96 on my ASVAB, I went in Open General (smart does NOT equal wise) and left the day after my high school graduation. I had to lose 40 pounds before MEPS and I did. Just barely. In basic training I lost another 50 pounds. My first experience at being part of a real team was in Basic. I had developed shin splints so bad I could barely walk. I knew I would never make the final run, but I refused to go to sick call or give up.

My fellow airmen rallied around me. Most of them huddled in a pack around me to hide us from the Training Instructors while two of them hooked their arms under mine in an effort to relieve the pressure on my shins. It worked. I passed. But I recognize I only passed because of my team.

After requesting jobs in flight positions, I failed my flight physical because of a low hemoglobin count, so I decided on Security Police – because that’s what one of my uncles was. The SP Academy was a huge confidence booster for me. In 1993, Air Force basic training wasn’t all that demanding. The SP Academy however, that was what I thought military training should be like. Push ups, flutter kicks, runs, low crawls to pick up your gear…I loved it. I packed on 10 pounds in muscle before I was done. But in my mind, I was still a fat kid who got picked on.

I went to Malmstrom AFB, Montana first, then I was stationed at Osan AB, South Korea from Feb 96 – Feb 97. I competed for a position in the Customs section – the guys that check your stuff at the airport – and was successful. And THAT is where this letter gets its title. The theory of six degrees of separation is that we are all connected in no more than 6 degrees. Also called the “6 degrees of Kevin Bacon.”

I’d like to think that you and I are within that 6 degrees based on the following. At the end of 1996, I was working at Osan Air Base Airport when some atypical-looking Navy guys got off a plane from the states and needed to be processed. My curiosity was piqued at their appearance. I quietly asked one who they were. “We’re SEALs” he responded. Outwardly, I nodded and asked them to accompany me to a private, secure office. Inwardly, I was screaming like a schoolgirl, “Navy-frickin’-SEALs?!?!?” We chatted for a few minutes and I got them processed in-country as quickly as possible. I let them know about the best bars and that I would be going out that night. Well…it was Korea. I went out EVERY night. They said they had that night off and we might see each other.

A few hours later I was buying them beers. They were not boastful, gregarious, or loud as I expected the the most feared military unit in the world to be.

After 20 years my memory has faded, but I said something to the effect of, “You guys are amazing! I can’t tell you how much I admire you because you are SEALs!” To which one responded, “Don’t admire us because we are SEALs. We just didn’t quit.” In my alcohol haze I was stunned and replied, “What?” His colleague said, “We’re not amazing because we’re SEALs. We just didn’t quit. You could be one if you wanted it bad enough. Just don’t quit.” The evening went on. My memories from that time are few, but I remembered that snippet of that evening for the past 23 years. In fact, I have thought about it many times.

As the years passed, I doubted my own memory. I wondered if they even were SEALs – the mythical warriors of the US military.

I left Active Duty in 1998 and went full-time reserves. I put myself through the Napa Police Academy (California) and was hired in a California Central Valley police department in 2000. In October of 2001, my reserve unit was the first in the Air Force to be called to active duty. I tried and tried to get orders overseas to “join the fight”, but due to my position in Investigations (detectives) my orders got canceled due to court martial’s every time. I joke that my Operation Enduring Freedom claim to fame is that I put US Soldiers in prison. Of course they were bad soldiers. One of the many was a molester. One was a Navy recruiter who stole the recruits’ credit information after they shipped out and ran up tens of thousands of dollars in their names. And one was stealing survival gear from aircraft heading into combat to sell at local flea markets. I’m proud of the work I did, but I still regret not being able to join the fight.

I was discharged in November 2002 and came back to my police department. I’ve had many never quit stories along the way. Seeing my partner’s head bounce off the pavement in a fight. Doing CPR on a drowned toddler. I lifted a car up to get a victim out that was trapped underneath it. Telling a mother her child was killed in a car accident. Telling too many people their loved ones were dead. Losing 75 pounds. My wife going blind for a period of time due to an very rare disorder. Rising through the ranks to Lieutenant. Kept on pushing on for the betterment of the community and my family

In the past few years I began running in full uniform to honor fallen police officers. I’ve run every distance up to and including marathons. My first uniform marathon was the 2017 Marine Corps Marathon. Uniform running has brought many people into my life. Amazing stories from wives, and children, and partners of officers killed. Celebrities donating their time to raise money for the fallen and even another, SEAL – Dom Raso.

Last September, my uniform running partner – a detective from up the road – and I ran 45 miles to the grave of every fallen police officer in our county. In the last 7 miles, our support crew noticed my sock was bloody and told me to stop. I refused. In my stupor, my mind went back to that bar in South Korea with those guys who said they were SEALs. “Just don’t quit.” “You can be one if you wanted it bad enough.” I kept repeating, “Don’t quit. Don’t quit. Don’t quit.” And I didn’t. I finished. I saluted the headstone of every cop killed in our county. I hugged the wives and children left behind. I didn’t quit.

On December 26, 2018, Corporal Ronil Singh of the Newman Police Department was killed a few hours after he kissed his wife and 5 month old son goodbye on Christmas night. Ron was an immigrant from Fiji. He and his brother Reggie would watch COPS on TV in Fiji and it was then that Ron decided he wanted to be a California police officer. Not just a cop. Not a cop in the US. But a California cop. His family immigrated to Canada, then immigrated to the US. He finished high school and then enrolled in college. He was hired as a Cadet at my department, which is when he came into my life. He rode out with me. I mentored him. He was my friend. I told him the hard truth that he needed speech therapy to get rid of his accent so we could understand him on the radio. He told me later that he was so angry at me for telling him that. But, he took my advice and learned to speak without an accent. He put himself through a police academy and got hired. He rose through the ranks and had a police dog. He married a beautiful woman and had a beautiful son. He was the American Dream that we have all pledged our lives to defend. Then, in the very early hours of December 26, 2018, he stopped a man for DUI. That man shot and killed him. Ron died alone, on a cold street in the community he protected. But, Corporal Ronil Singh NEVER quit. He died for the county he loved and CHOSE. A kid from Fiji spending his whole life to fulfill a dream that never gave up on – never quit on. Now, because of him, his wife and brother are on a first name basis with President Trump. His community flies blue line and U.S. flags on every street. And a nation mourns his loss.

I decided this year to do an honor run for Ron. On December 28, 2019, I will be running in full duty uniform from the spot where he was murdered in Newman to the Stanislaus County Peace Officer Memorial at Lakewood Memorial Park in Hughson, California. The route is 28.2 miles. Ron’s badge number was 282. I deeply miss my friend.

While training for this, I switched from music to podcasts. I listened to several running podcasts and motivational podcasts and then I stumbled upon Team Never Quit. I have spent hundreds of running miles listening to your shows. I have laughed out loud at your antics and shed tears when guests like Tiggs shared their stories. While you all say “Never Quit” dozens of times, I never thought much about my encounter in Korea. A few weeks ago, I had an epiphany along some dark running path at 0500 one morning. “Never quit.” Those guys in Korea 23 years ago really were SEALs.

I am now healthy and fit and determined enough to run 28 miles in full uniform to honor my friend who sacrificed himself for our country. Because of a conversation that has stayed in my brain for over two decades with some SEALs whose names I can’t remember in a bar, I will not quit. I pray those guys made it to the end of their careers alive and healthy. I read stories like Lone Survivor, ORW, and others that talk about SEALs who perished and truly wonder if those guys that had so much impact on my life today died for our county. I’d like to think that they are looking at their DD214 and enjoying life somewhere.

I also wonder if you all crossed paths with them at some point. Six degrees of separation, y’all.